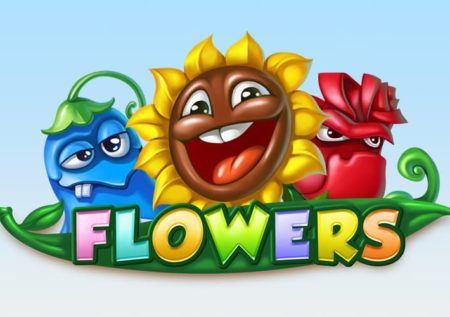 Flowers might sound relatively simple and yes in a way it would have been if it didn’t come from giant software provider NetEnt.

They didn’t try to enhance or blow-up the game title either and as you have guessed the screen is filled with flowers. Flowers with a difference though as some of downright angry looking, others look happy while some look vicious.

The five-reel, three-row slot has thirty fixed pay lines and an elegant, yet simple video slot with interesting features. Its symbols also include playing cards ranging from J through to Ace. The flower is the higher paying symbols, with the lily and the bluebell the two second-highest. They are followed by the Venus Fly Trap, sunflower while you also have the highest paying, angry rose.

The smiling cloud is the game scatter and is something to look out for as it triggers the free spins. You also have a wild symbol that replaces every symbol except for the scatter. What makes Flowers extraordinary is that a single symbol can have two flowers instead of one, which acts as two symbols. For example, if you have a sunflower with two flowers on it as well as a single symbol also with a sunflower on it, it means you have three sunflowers even though its only two symbols.

Available on mobile and desktop

Symbols which acts as double symbols