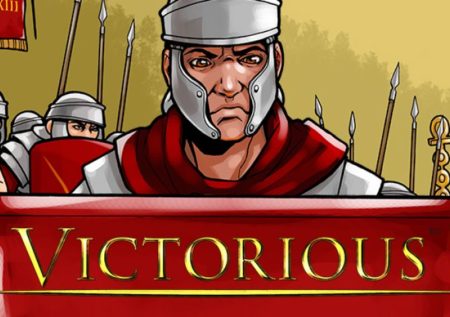 Victorious is one of the best Roman-Themed video slots with an impressive 243 ways to win.

Marching Roman soldiers are the background with the number 243 embellished on the pole of one helmeted soldier. The soundtrack is incredibly fitting with a marching band’s drumming and occasional gong clang.

A Golden Eagle is the wild while the scatter is a Golden Wreath. The wild substitutes all symbols except for the scatter and the scatter also triggers the free spins. When you enter free spins by landing three scatters, the screen changes to a battle scene and while in free spins, your wins a tripled too.

While you can trigger more free spins while in free spins mode, the newly added spins do not have multipliers. Three Golden Wreaths give fifteen, four gives twenty while you get twenty-five free spins when you have a full line. It is rather unusual than NetEnt didn’t incorporate a bonus game into one of their top slots since it is one of their latest releases.