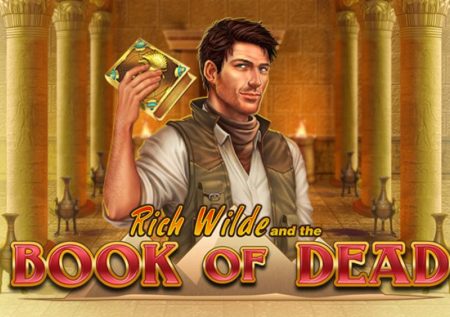 The video slot from Play’n Go is visually awesome with an outstanding design based on an Ancient Egypt theme.

Unlike other online slots, Play’n Go decided on having both a scatter and the wild but make it one symbol acting as both. It is The Book that replaces all symbol and obviously in Book of Dead also the scatter.

The Book triggers the free spins in the game too and a minimum of three are required to activate the ten free spins. Another interesting feature is that the game itself chooses a random symbol that is already on the player’s screen to become an expanding symbol before the free spins start.

The free spins will start and after players have won for the free spins, the special symbol could expand again if there is another possible winning combination on the reels. The symbols include the usual playing cards from cad nine through to Ace, which is the lowest paying for a combination. The highest paying is Riche Wilde, the explorer, while other symbols include Osiris and Anubis. Players should keep in mind that Book of Dead is a high variance slot and the potential of hitting the jackpot rather difficult.